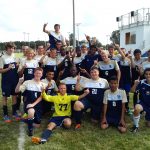 The Boys Soccer team defeated teams from Lawrence Central, Guerin Catholic, and Lafayette Jeff on their way to a Pike Preseason Tourney Championship. Come out and support the Hawks as they look to continue their winning ways during the regular season.