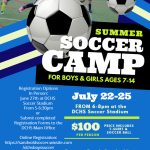 Our boys soccer team would like to extend a HUGE thank you to everyone that came out to our in person (and online) registration event for the youth soccer camp this evening! We are able to extend the deadline for registration until June 27th, but this will be a hard deadline to be sure that 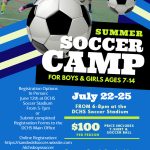 A quick reminder to anyone who has been considering signing up for the summer youth soccer camp, that there is only ONE week left to register! Help support the boys soccer team! Please contact Coach Sandvold if you have questions about registering or may need additional time to register. Camp Details: The boys soccer team 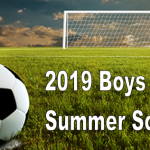 The 2019 Boys Soccer Summer Training Schedule is posted here: 2019 Boys Soccer Summer Schedule Please contact Coach Sandvold if you have any questions regarding this schedule or what is required to be eligible to participate. All players need to complete a physical and the electronic forms before they are eligible to participate. All players 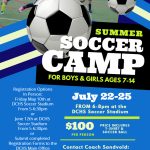 The boys soccer team will be hosting its first youth soccer camp under Coach Sandvold in July 2019. The camp will help raise funds for the boys soccer program for the upcoming season. Details for the camp are listed below as well as on the attached flyer. Please contact Coach Cory Sandvold if you have

Any players that are interested in joining the boys soccer summer training are encouraged to come out when training resumes on July 9th. Training is every Monday and Wednesday at the high school from 4:30pm – 6:30pm. All players are required to complete the electronic athletic forms as well as have a current physical on 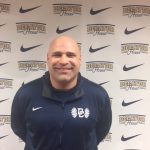 Decatur Central has named Cory Sandvold as the new Head Coach for the Men’s Soccer program. Cory was born and raised in Portland, Oregon and in July of 2016 moved to Indianapolis with his wife Jessica, daughter Kylie, (13, who attends Decatur Middle School), and daughter Kennedy, just (5, who attends Liberty Early Elementary). Cory

Due to Hurricane Maria in the Caribbean, the originally scheduled Indy 11 vs. Puerto Rico contest for Saturday night (after the Decatur Central vs. Whiteland match) has been cancelled. The originally scheduled DC vs. WCHS match will still take place at 2 PM and NO ticket will be needed to enter Carroll Stadium. If you

No Events This Week

Events are added by athletic staff.
View All Events