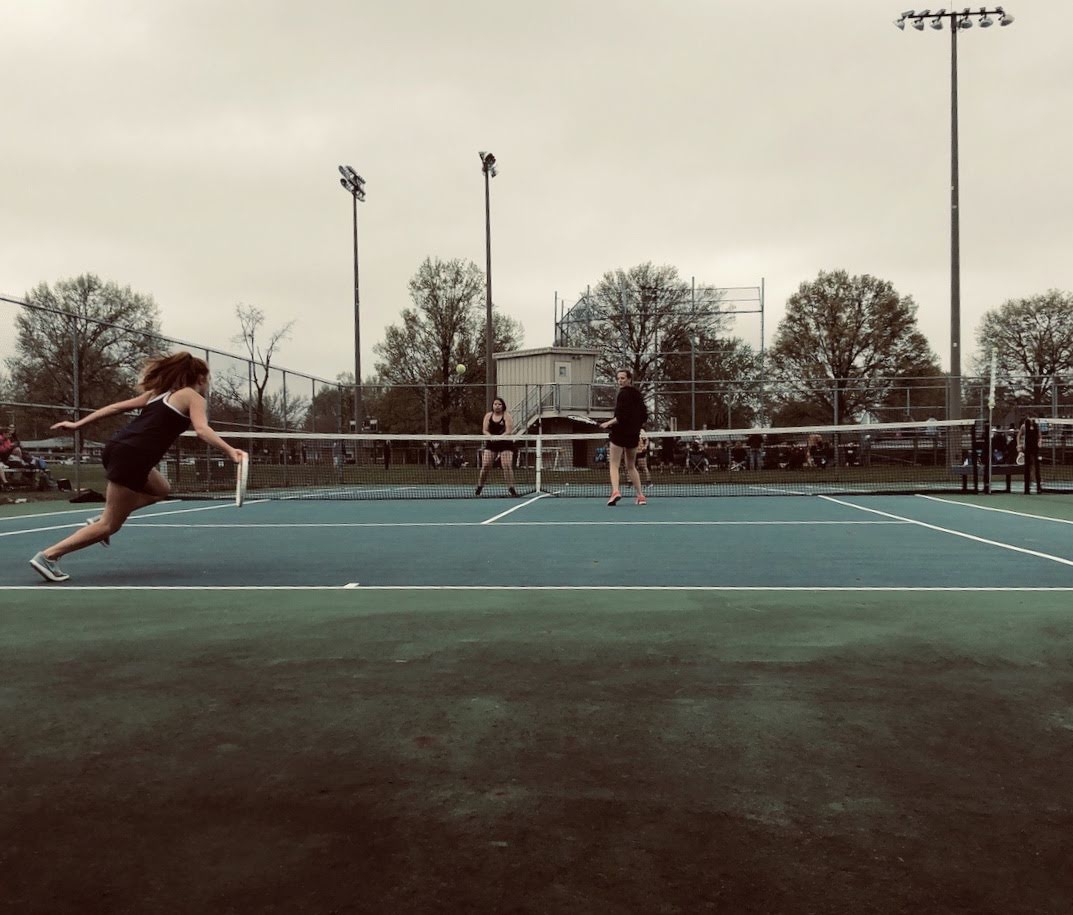 The Lady Hawks tennis team have been proving themselves worthy this season. The team is young, has built a great team dynamic, and has started to mesh well. And something that has been really fun to see has been how no matter the wins or the losses, the team always walks away thankful for the outcome and having learned something new in the process.

And tonight, despite a couple of tough losses individually, the team once again managed to sneak a close victory over Speedway, once again proving that tennis is just as much a team sport as it is individual.

Speedway proved to be a very formidable foe on all five courts. Every point in every game mattered, and lots of good things were seen amidst a few missteps as well in the process. At singles, #2 singles junior Tori Heighton brought in the first point for Decatur with a beautiful 6-4, 6-1 finish against her opponent, senior Karly Smith. Second off the court was #3 singles sophomore Izzy Ison, who walked away with a 6-2, 6-3 victory over junior Orng Moo with a long match of long rallies and consistent footwork to cover the court. #1 singles junior Alex Sumpter played a long and hard first set against a very strong freshman powerhouse, Tiana Sparks. Sumpter rose to the occasion but fell short 4-6 the first set. The second set was a bit tougher, as Sumpter struggled to string points together against very swift rallies from Sparks. Eventually, Sumpter fell to Sparks 4-6, 0-6, giving the first point to Speedway, making it a 2-1 match.

At doubles, the games and points mattered all the more. First to finish was #2 doubles duo “Slam” junior Samantha Schick and sophomore Lia Burton, who finished a quick first set 6-1 against senior duo Davanie Crouch and Melanie Wall. Speedway made a strong comeback in the second set, but eventually “Slam” was able to squeak out the second set and take the third point for Decatur 6-1, 7-5, giving Decatur the team win for the night.

But the match of the night came on court four from #1 doubles, juniors Taylor O’Dell and Yennie Tran.

It was the ultimate game of cat and mouse, and both sides played both roles often. Lots of games to deuce. Lots of deuces played in each game, and a lot of back and forth made this a match to watch. “Yaylor” fought hard to take the first set, but Speedway fought back in the second set to win one for their side as well. So it all came down to the third set tiebreak to decide the final point. Eventually, after a few points dropped in a row to unforced errors, Yaylor ended up dropping the final set to sophomore Taylor Sparks and senior Steffi Weiss 6-4, 5-7, 0-1 (6-10), making the final outcome quite a close shave.

JV had a close night as well. Due to size of space, only four teams were able to compete tonight in doubles, which ended in a 2-2 draw for both teams. Wins for the night came from #1 doubles junior Isabelle Glenn and freshman Taryn Cook (8-2) and #2 doubles duo sophomore Nuria Koestner Gento and freshman Samantha Lopez!

The Lady Hawks have been having quite a season, and now stand at a great 6-5 record for the season. Our girls have been working hard and putting their all into every match! Their next match takes them to Whiteland on Thursday for the last conference match before the Mid-State competition next week. Let’s go Hawks!