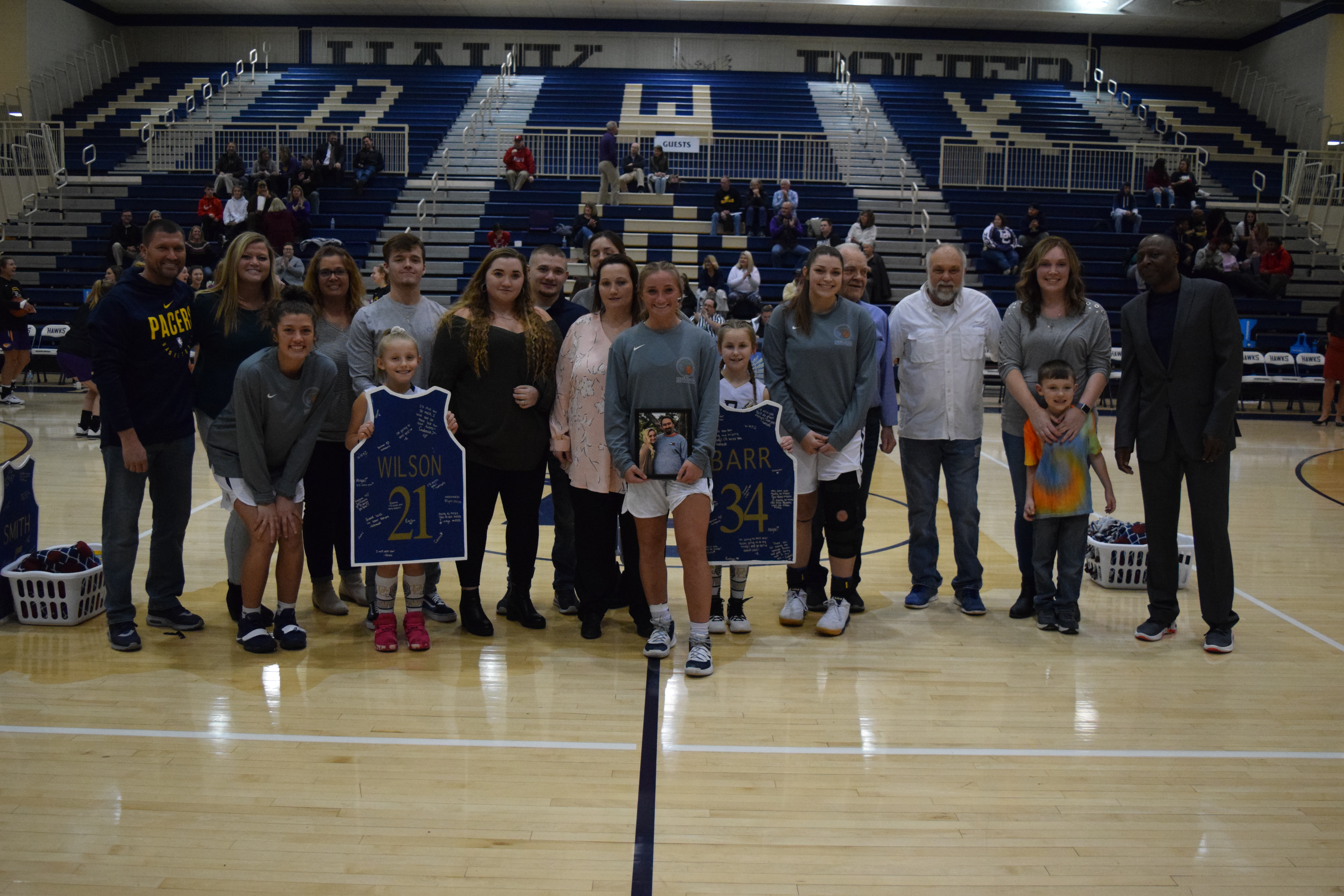 Guerin Catholic arrived at the Hawks Nest and after one quarter looked to be up for the challenge only trailing by 2. The Hawks seeing the challenge woke up in the 2nd quarter outscoring the visitors 17-5. After that they never looked back, winning by the score of 58-30 on Senior Night and the last home game for Seniors.

The Seniors that were recognized were Cailin Barr, Vanessa Wilson, and Kenzee Smith. All 3 were four year varsity players and all three will be forever remembered as being a part of a Class that had a great deal of success. In an interview with Coach Gibbs he said ” These 3 girls have persevered and battle through the ups and downs of the beginnings of a program. They have always showed class and respect for the game and for the community. I have been blessed to coach and been a part of 3 great student athletes lives. I wish and know they will have all the success they desire.”

Vanessa Wilson scored her 1000th point on this special night. The 1000th point came on a 3 point field goal, on the left side of the court. Vanessa finished with 25 points on 9/14 shooting. Vanessa was a 4 year starter on a team that continued to get better each season due to her dedication. Vanessa has basketball offers to play in college and will succeed in whatever venture she embarks on next.

Kenzee Smith had 12 points on 4/7 shots in her final home game. She also added 4 rebounds, 2 assists, and 5 steals. Kenzee has been a leader both on and off the floor and will alway be remembered for her fight and MAMBA mentality. Kenzee Smith will take her talents to UIndy, where her Softball excellence will be on display. Nothing will stop her from achieving greatness in whatever she chooses to do.

Cailin Barr, another 4 year letter winner, had 4 points in the game and 3 rebounds. Cailin struggled with injuries for each of her four seasons. Had she been healthy who know how great a career she would have had in the Blue and Gold. She has shown great perseverance and dedication as she battled each year to return to the team. Cailin’s has a never quit attitude that will help her in all her future pursuits.

The Hawk win moved the team record to 10-10. The team has grown and has shown they have a lot left in the tank. The hope is that what’s left will be enough to get the Hawks first Sectional win in several years. Before that the Hawks travel to Plainfield Friday to play an always tough Conference Game.