The October female Student-Athlete of the month is DCHS Sophomore Ayva Schmalz. Ayva is a member of the Women’s Cross Country Team. She has had an amazing start to her high school Cross Country career, winning XC MVP honors two years in a row. Ayva is currently #3 on the All Time DCXC fastest time list. She has also won All-Sectional Honors and has been a Regional qualifier two years in a row. Coach Courtney Rogge said, “Ayva is the type of runner that you have to tell to slow down or to stop running so much. She wants to be the best that she can possibly be and she works really hard for it. Ayva has great success in Cross Country, but is also very humble. It has been great working with her and watching her develop for these past two years and we are so excited for her future.” Ayva is currently ranked 56th in her class with a 3.6 GPA.

Senior Nate Wachnicki has been nominated as the October Male Student-Athlete of the Month. The DCHS Senior is a member of the Men’s Cross Country team. Nate had a solid season, capping the year off with a strong Sectional race to advance to the IHSAA Regional where he posted a impressive time of 16 minutes and 50 seconds. Not only does he work hard on the Cross Country course, but also in the classroom. As a result of all of Nate’s hard work he was voted Academic All-State First Team. Coach Gillum said, “Nate turned in performances this year, race after race that put him on a new level each time. He has established himself as a formidable racer in our conference and sectional. 16:50 is fast, I don’t care who you are.” Nate currently holds a 4.4 GPA for his High School career, which ranks him 1st overall in his class. 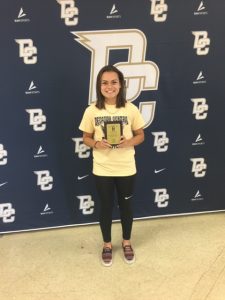 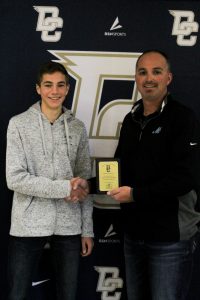