The August female Student-Athlete of the month is D.C.H.S. Junior Jasmine Hermosillo. Jasmine is a member of the Lady Hawks Soccer team. She has had a quick start to the season scoring 3 of the teams 14 goals while playing as one of the power-house center-backs. One goal which she cored form half field in the center-back position. Jasmine has been a brick wall on the teams back line only allowing in 2 goals so far for the season. She has been a great play maker up through the field and allowing the Lady Hawks the advantage to score many of the teams goals. Coach Angela Keith said, “Jasmine is quite the player both on and off the field. She strives to do her best and expects the best out of everyone around her, including myself.”

Junior Emma Etter-Cox is also the August female Student-Athlete of the Month. The DCHS Junior is a member of the Lady Hawks Golf team. Although Emma has only been playing golf for a year, she has had a tremendous start to the season and has emerged as a team leader. She has lead the team in scoring 4 out of the 8 matches played so far while being the medalist(best overall score) 3 times. 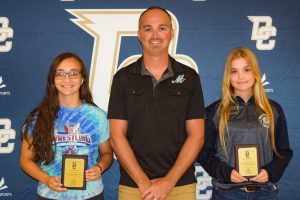 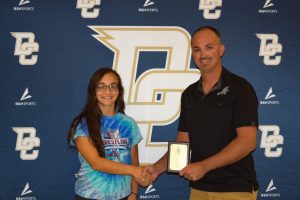 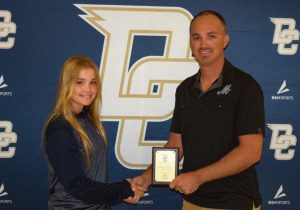